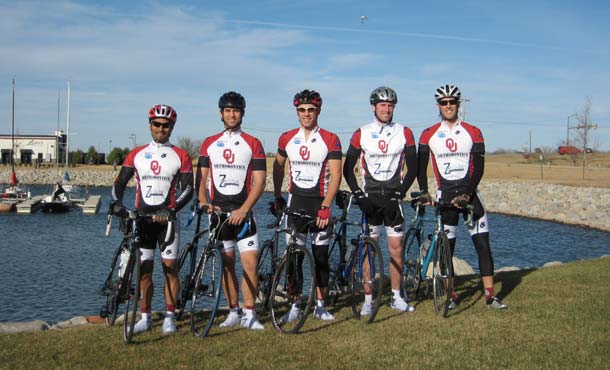 Ziegler Practice Transitions, Ltd. has provided $3,000 in funding for the orthodontic residents of the University of Oklahoma for the purpose of creating and maintaining an amateur cycling team.

Here is a statement from the team:

The OU orthodontic cycling team consists of five orthodontic residents currently at the University of Oklahoma. We share a common interest in athletics, running, and cycling. We thought it would be a great idea to have a cycling team and compete together in various cycling events and even triathlons.

We approached numerous dental and orthodontic companies with our idea, and because of Ziegler Practice transitions’ generous sponsorship, we were able to form the team.

We have competed in a variety of events:

Additional events planned this year are:

We look forward to doing well this upcoming season and are grateful to all of our sponsors.

We also feel our uniforms and team have helped to raise awareness for orthodontics in general! 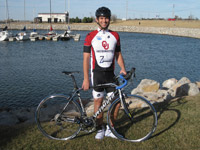 I grew up in a large family, four brothers and one sister, mostly in Washington State. I have also lived in other parts of the country, such as: Syracuse, NY; Miami, FL; and Cincinnati, OH. Some of my interests include: Sooners football, triathlons, baseball/softball and reading. I have been cycling my whole life but more recently got involved in competitive cycling. It has been great sharing a common interest with my co-residents that we can enjoy when we aren’t bending wire. It has also been a great way to stay in shape and is something I hope to continue on for my whole life. We are grateful to Ziegler Practice Transitions and others for making all this possible and allowing us to form our cycling team. 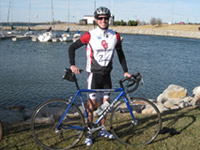 I love playing and doing anything outside…love to surf, fish, play tennis, mountain bike and ride. I mountain biked throughout college and began road cycling at the end of college. I have participated in The Assault on Mt. Mitchell road race in Spartanburg, SC. Since college, I have participated in weekly group rides and have continued to mountain bike. I am very excited to represent our sponsors and the OU Department of Orthodontics this year at several races and out on the roads. I look forward to an excellent season for the OU/Ziegler Multisport team and extend a thank you to all of our sponsors: Ormco, Charlene White, The Tweed Foundation, KadOrtho.com, braces.org and, of course, Ziegler Practice Transitions. 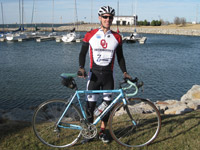 I ran both cross-country and track in high school and at the collegiate level. During the Spring of my junior year in college I began cycling as cross-training for running. After college, I competed in several duathlons in my home state of Pennsylvania. It wasn't until I moved to Austin, TX in 2002 when I really got into cycling. I've competed in informal Saturday morning and Tuesday night races since then and I'm looking forward to having a team to race with this year. We are very excited to represent our sponsors and the OU Department of Orthodontics this year at several races and out on the roads. I will be racing triathlons of all distances in addition to cycling road races and time trials. I look forward to an excellent season for the OU/Ziegler Multisport team and extend a thank you to all of our sponsors: Ormco, Charlene White, The Tweed Foundation, KadOrtho.com, braces.org and, of course, Ziegler Practice Transitions.

I was always a fish in the water. Starting young, I last swam competitively in high school and then just recently again in Sprint triathlons. After practicing 12 years in general practice, I am now in orthodontic residency with men 10+ years younger than me. Just keeping up with them should earn me some age group medals in the current 2010 triathlon season. This is the first time on a road bicycling team and I am excited to contribute. I enjoyed mountain biking while I lived in Denver the 12 years while I was practicing dentistry there. Road biking has been very different and fun in many ways. I’d like to thank our sponsors for giving generously: Ziegler Practice Transitions, Ormco, Charlene White, The Tweed Foundation, KadOrtho.com, and braces.org. 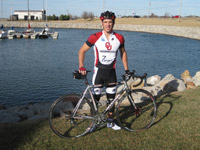 I started competitive mountain biking in 2000. My first race was in Mackay, Idaho called the White Knob Challenge. I thought it would be a fun weekend activity. I ended up finishing dead last in my division. This race opened my eyes to the competition involved in cycling and I came back and won that same race the next year. Since then I have placed in mountain bike races in the expert division and even won a few road races. Most recently I placed 6th last year in the Texas Hotter N Hell 100. I love biking whether it be in the mountains or on the road. It’s a good break from mundane things that must be dealt with on a day-to-day basis, keeps you in shape, and builds good comradery. I would like to thank our sponsors, and especially Ziegler Practice Transitions, which allowed us poor orthodontic residents

Ask Us a Question

Would you prefer to have some questions answered before getting started with us? Do you need some assistance in determining if now is the best time to sell your practice? Click here to send us a brief question and we'll respond via email as soon as possible.

Are you interested in Selling your Practice, bringing in a Partner or hiring an Associate?

Are you interested in Buying a Practice, being a Partner or working as an Associate?

Click here to learn about our dental practice transition services, various types of represenation and other services related to dental transitions.

Ready to get started? Click here to request an Engagement Letter and a member of our staff will respond to your request as soon as possible.

Not sure if we’re the right practice transition firm for you? Click here to read what past clients have to say about their experience with our firm.

We have decades of experience in orthodontics, as educators for the dental profession, and as consultants for practice transitions. Learn more.